I was recently invited along to read at the launch of the third issue of Not Very Quiet, a Canberra-based women’s poetry journal.

Not Very Quiet is a very welcoming, social group within the Canberra literary scene. Their events are good fun and have a friendly atmosphere. The Issue 3 launch event was no exception. 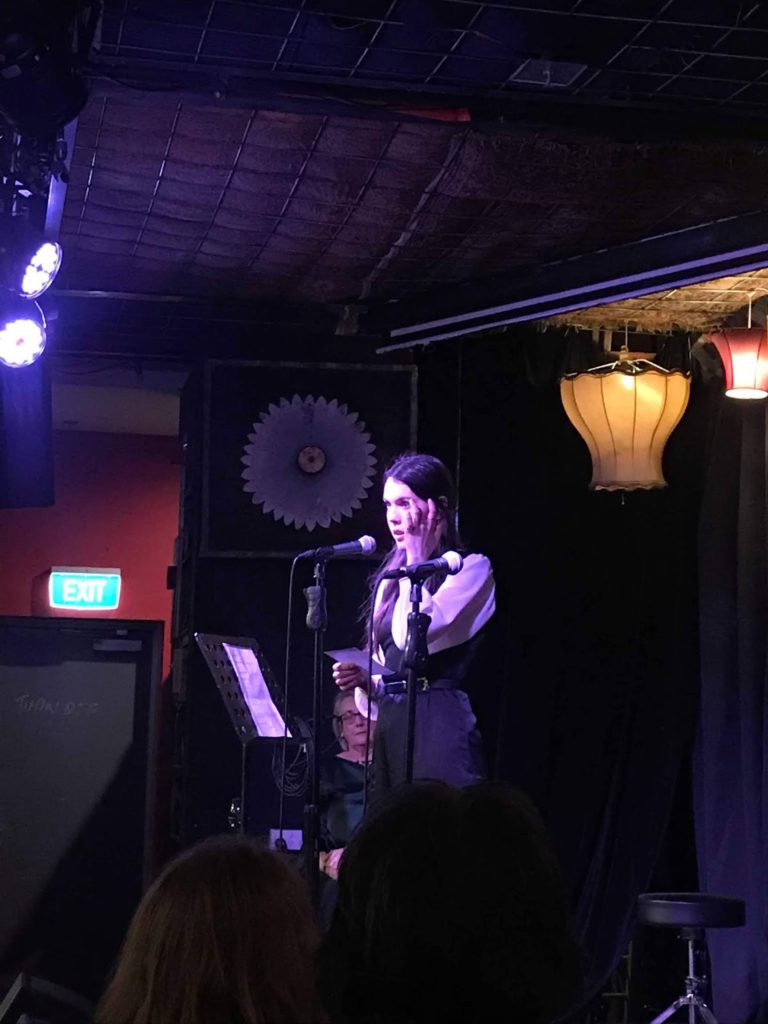 Looking perplexed at the Issue 3 launch.

This is the third time one of my poems has been published by Not Very Quiet (thank you, NVQ!). The poem I submitted this time was called ‘What Now’.

Funnily enough, the poem was written after I had scraped the bottom of the inspiration barrel and come up with nothing but a few splinters and an unappetising smell of fish clinging to my hair. I had seen an online post about NVQ seeking poems for their third issue and I had thought it would be nice to enter. Then I realised that I had nothing to submit. What’s more, I was feeling entirely out of ideas.

So I began trying to create an idea out of nothing. Yet trying very deliberately to write poetry – to deliberately write something meaningful – comes with a certain irony. Actively trying to craft a poem with a deeper meaning feels disingenuous when not even a grain of good-quality, non-processed #organic inspiration is presenting itself. I felt like a fraud with nothing to say.

It crossed my mind, however, that plenty of people must deliberately try to write deep and meaningful things and feel fraudulent all the time – an idea I found rather amusing. So many industrious barrel-scrapers holed up at our desks, deadlines approaching! Anyway, I was tickled enough by the irony of the situation that I decided to write a poem about trying to write a poem instead.Whether a poem about the irony of writing a poem when one has nothing to say actually says something, however, remains inconclusive.

Does this poem have any worth? You decide.

What Now (first published by Not Very Quiet here)

More icing than cake
More frame than picture
All lamp-rubbing and no genie
.
Standing at the sink, curtains drawn
Rain drowning the rutabaga
Waiting for inspiration – never strikes twice
.
Now’s the time to weave tongues together
Words of a feather, to pin into a cap;
Describe for me unseen scenes; I see
.
I am part of this problem
This problem is a part of me
Poetry should be more ‘O!’; less trying
.
Everyone dying to impress everyone else
And impress that we are not doing so
It’s a party one attends but is too insecure to enjoy
.
More lace than grace, more rhyme than … reason
Trotting out ideas like daughters in finishing school; we forget
To teach them how to speak past their ivory collars.
Issue 3 of Not Very Quiet is now online. You can read more of it here.
Tweet
Share
Pin
Share