A piece I wrote last year for Science Fiction and Fantasy Writers of America. The fact that I’m Australian didn’t seem to bother them, so we’ll just go with it. 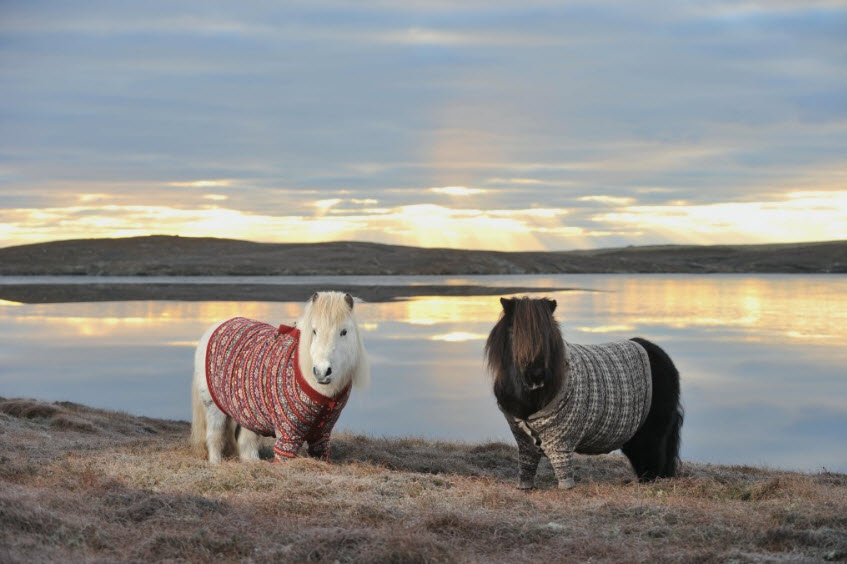 The official ambassadors of the 2013 VisitScotland campaign. No, really!
*

Writing novels – and fantasy novels in particular – is an undertaking filled with pesky logistical hurdles.

Sometime characters get wounded, and there are no ambulances in fantasyland. Other times you need a hero to carry spoils back from the dragon’s lair, but you’ve already established that he is a hero of the weedy, unlikely kind. And then there are the times when your assassin needs to pretend to be in two places at once and return to the city before nightfall – but there’s an irksome desert in the way.

In what concerns many car-free fantasy worlds, horses are the perfect solution to transport issues, barring flashier options of teleportation or dragons. Yet a regrettable trend across much fantasy writing is that of a horse not really being a horse, but simply a plot device; a vehicle to help carry a story along.

Horses, however, are not vehicles.

Unless you have had experience riding and working with horses, it can be easy – and it’s entirely forgivable – to unwittingly make mistakes when depicting your protagonist’s steed. What’s more, while this could appear a trivial issue, anyone with basic equine knowledge will be able to identify such errors, and may grow sceptical of your authority as a storyteller. On the plus side, however, such errors can also be avoided relatively easily, once one becomes aware of them.

Long journeys are common in fantasy novels, and can make great panoramic montages in the cinema of one’s mind. Unfortunately, however, horses are not capable of galloping day and night without food, water, or rest (and nor is any rider). What’s more, horses always need to be cooled off after exertion.

Unless rigorously trained for endurance, the most ground a horse might be able to cover in a day is about 30-40 miles – and they’d likely be tired afterwards. Terrain also affects a horse’s stamina.

Essentially, remember that horses are living creatures; they tire, they grow hungry, and they get sick. They also have minds of their own – and these aren’t always on the same page as those of their riders.

No amount of natural talent can make a horseman in a day. If one’s horse is tolerant, one may be able to hold on over flat terrain after a few hours in the saddle. Nevertheless, there’s a big difference between not sliding off immediately, and being able to ride competently. It can take months – even years – before one is truly balanced enough to cope with a horse moving at various gaits, and occasionally acting up. Yet it’s not uncommon in fantasy novels for characters to pick up the handy skill of horse-riding in one day.

Furthermore, handling horses on the ground is also a skill requiring time. When one first begins working with horses, one can’t read their body language; flicking ears, shifting legs, squeals and snorts. The initial reaction when faced with a horse also tends to be one of intimidation – they’re big animals. So for your protagonist to be confident catching horses, feeding them, tacking them up… that all takes time and experience. You don’t need to devote pages to your character learning relatively mundane skills, but you should acknowledge that these are skills which they are learning, or which they have somehow acquired at another point in time.

Additional note: horses aren’t domesticated in a day either. Worth remembering next time you chance upon a handy herd in the wilderness –
sorry.

In the same way in which all humans are different, and all dogs have their own personalities, no two horses are the same. This not only means that some horses are lazy and others eager, for example, but also that each horse-and-rider relationship will be unique. Sometimes riders really can’t tolerate their mounts, and vice versa. Frankly, it’s perfect comedy fodder.

It’s worth remembering that horses operate on a far more instinctive level than do humans. Considering, therefore, that horses in the animal kingdom exist as prey, not predators, it’s unrealistic to have a horse crushing people under its hooves unless by complete and utter accident. Horses are not vicious creatures – ones which lash out are generally either scared, or have a history of poor treatment – and they rarely attack humans. This is especially true when they are under saddle.

[Edit: there will always be exceptions. Animal-lover that I am, however, I’d argue that like most creatures, horses are disinclined to act viciously unless there is a reason: protecting the herd, lashing out against poor treatment, being forced to smite enemies underhoof during a cavalry charge, etc. Animals typically aren’t born mean].

What’s more, various behaviours you’ve seen expressed by horses in pop culture are wrong. Horses do not sniff the ground like dogs. They do not rear if the only cause for doing so is cinematic aesthetic. And they usually only whinny when calling to one another while separated, or anticipating food; they are not vocal in the same way as humans.

Yes, you may have to wonder how your peasant can afford to feed a horse. Yes, you should probably re-evaluate whether your assassin will get back to the city in time. Yes, it might be advisable to read up on details which aren’t especially thrilling but which are well worth getting right, such as that horses can’t vomit.

Yet variables and variety regarding the horse needn’t be perceived as foiling one’s story; indeed, such variables can translate into additional conflict. You may not have a car on which to burst a tyre, but you can write about a lame, cantankerous steed – and your protagonist will end up stranded in The Forest Of Darkness either way.

What’s more, approaching a story element often considered mundane with an attitude of awareness and curiosity, could also help generate ideas in other areas. What might be the physical quirks of dragons? Is there more life to depict in the world of the trusty steed?

One never knows – and you’re the writer, so you tell me. Just don’t get complacent, and put a perfectly good opportunity out to pasture.